Italian excavators working in Capernaum may have uncovered the remnants of the humble house of Peter that Jesus called home while in Capernaum. How accurate is Luke’s account of the riot at Ephesus described in Acts 19:23–41? Excavations at the site bring this Biblical event to reality in a new way—from inscriptions and figurines of the goddess Artemis to the theater where the riot took place. Researchers announced their belief that they may have uncovered the biblical town of Ziklag. Located between Kiryat Gat and Lachish in southern Israel, Khirbet a-Ra‘i […] 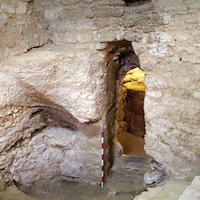 The childhood home of Jesus may have been found underneath the Sisters of Nazareth Convent in Nazareth, Israel, according to archaeologist Ken Dark.